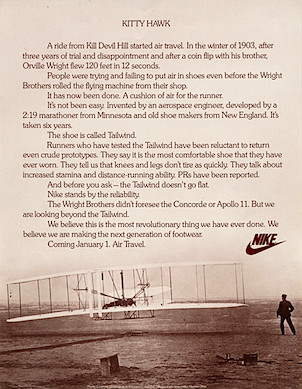 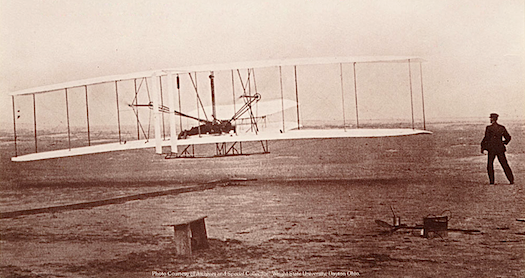 A ride from Kill Devil Hill started air travel. In the winter of 1903, after three years of trial and disappointment and after a coin flip with his brother, Orville Wright flew 120 feet in 12 seconds.

People were trying and failing to put air in shoes even before the Wright Brothers rolled the flying machine from their shop.

It has now been done. A cushion of air for the runner.
It’s not been easy. Invented by an aerospace engineer, developed by a 2:19 marathoner from Minnesota and old shoe makers from New England. It’s taken six years.

The shoes is called Tailwind.
Runners who have tested the Tailwind have been reluctant to return even crude prototypes. They say it is the most comfortable shoe that they have ever worn. They tell us that knees and legs don’t tire as quickly. They talk about increased stamina and distance-running ability. PRs have been reported.

And before you ask – the Tailwind doesn’t go flat.
Nike stands by the reliability.
The Wright Brothers didn’t foresee the Concorde or Apollo 11. But we are looking beyond the Tailwind.

We believe this is the most revolutionary thing we have ever done. We believe we are making the next generation of footwear.

Nike Air Mowabb LONG BEFORE THE INVENTION OF CEILINGS AND WALLS

Nike “YOUR TIME WILL COME.”

Foot Locker “We put women on an equal footing in every sport.”