A Barren desert beside a blue river, and a tiny town called Biggs. Some things don’t make much sense in Southern Washington along the Columbia. And you fully realize that when you look across the water and up in the desert hills you see Stonehenge.

Now you know Stonehenge is in England, so you hike across the bridge and up on top of the bluff there really is Stonehenge there and nearby there’s the structure as a protest against world war I, because of some unusual beliefs he had about the war and Stonehenge itself and how he expected his concrete replica to someday become one of the biggest tourist attractions in the country.

And after you finish reading the plaque you walk around Sam’s monument some more and there is no one else around and it doesn’t really bother you that Sam built his extra- vagrant war memorial in the middle of nowhere because of some hair brained theories. After all, if he had erected just another statue of an infantry man you never would have hiked up he hill and enjoyed the views from there, and you never would have thought the thoughts you thought and, anyways, now you know what in Sam Hill it’s all about. 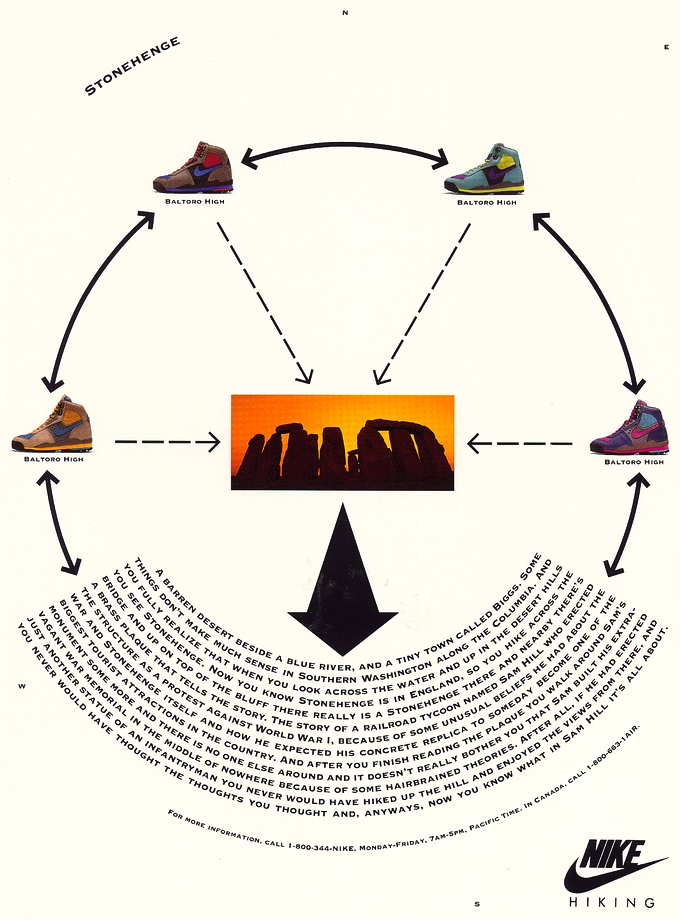 Nike Rivalry tennis shoes “WHAT IT’S LIKE TO PLAY TENNIS IN OUR NEW SHOE.”

Athletic Attic / Nike “WILL YOU BE RUNNING AT YOUR BEST THIS SEASON?”

Nike Air Force 2 MAKE IT FEEL LIKE THE GARDEN.

Nike Sock Trainer “EVERY SURVEY MUST COME TO A CONCLUSION.”