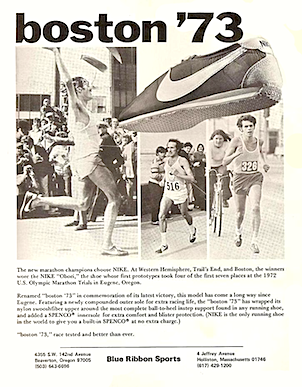 The new marathon champions choose NIKE. At Western Hemisphere, Trail’s End, and Boston, the winners wore the NIKE “Obori,” the shoe whose first prototypes took four of the first seven places at the 1972 U.S. Olympic Marathon Trials in Eugene, Oregon.

Renamed “boston ’73” in commemoration of its latest victory, this model has come a long way since Eugene. Featuring a newly compounded outer sole for extra racing life, the “boston ’73” has wrapped its nylon swooshfiber upper around the most complete ball-to-heel instep support found in any running shoe, and added a SPENCO innersole for extra comfort and blister protection. (NIKE is the only running shoe in the world to give you a built-in SPENCO at no extra charge.)

“boston ’73,” race tested and better than ever. 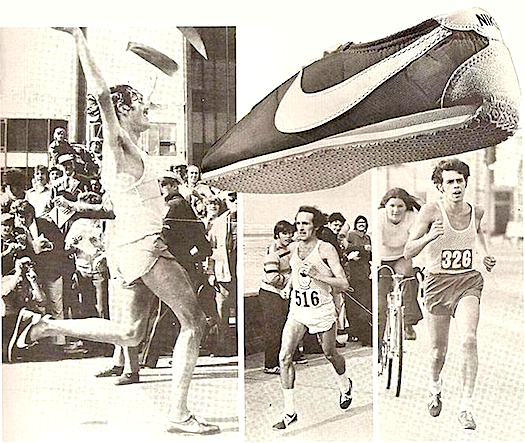 Nike Air Max2 “The basic unit in technology is not the bit, but the body.”

Nike Rivalry tennis shoes “WHAT IT’S LIKE TO PLAY TENNIS IN OUR NEW SHOE.”

Nike LDV running shoes “THE NEW LDV. THE EVOLUTION OF THE REVOLUTION.”