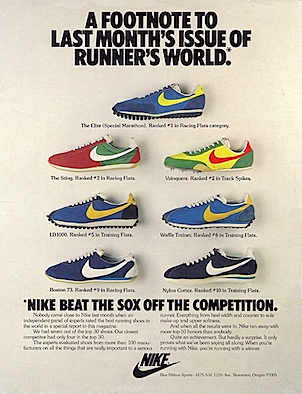 A FOOTNOTE TO LAST MONTH’S ISSUE OF RUNNER’S WORLD.

The Sting. Ranked #2 in Racing Flats.

NIKE BEAT THE SOX OFF THE COMPETITION

Nobody came close to Nike last month when an independent panel of experts rated the best running shoes in the world in a special report in this magazine.

We had seven out of the top 30 shoes. Our closest competitor had only four in the top 30.

The experts evaluated shoes from more than 100 manufacturers on all the things that are really important to a serious runner. Everything from heel width and counter to sole make-up and upper softness.

And when all the results were in. Nike ran away with more top 10 honors than anybody.

Nike Elite running shoes “HOW TO BREAK THROUGH THE WALL.”

Athletic Attic / Nike “WILL YOU BE RUNNING AT YOUR BEST THIS SEASON?”

Nike Elite running shoes “THE RACING FLAT THAT TOOK ON THE WORLD AND WON.”

Nike Liberator / Lady All Court / Lady Roadrunner The Athlete’s Foot “BEFORE WE FIT YOU WE’D LIKE TO GRILL YOU.”

Nike Air Max2 “The basic unit in technology is not the bit, but the body.”

NIKE AIR TERRA ACG “OVER THE MOUNTAINS AND THROUGH THE WOODS TO NOBODY’S HOUSE YOU GO.”