The queen of england’s favorite subject.

If your legs get tired late in a match, Chris Evert Lloyd has a tip for you. Change your shoes. To converse.

In the late going this year, at Wimbledon, Chris Evert Lloyd enjoyed an advantage her opponents did not. She was wearing Converse tennis shoes. 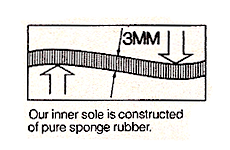 3MM
Our inner sole is constructed of pure sponge rubber.

Shoes with a 3mm deep inner sole that can have some remarkably beneficial effects on your feet and legs by the time the third set rolls around. But don’t jump to any conclusions about what a Converse tennis shoe could do for your endurance based on that fact alone.

First, because no one plays harder than Chris Evert at Wimbledon. Second, be cause the inner sole of a tennis shoe, by itself, doesn’t determine how comfortable a tennis shoe

feels. It’s a function of the last. You see, for a tennis shoe to be supremely comfortable set after set, the top of the shoe has to fit your foot correctly. And that’s where the Converse last comes in. 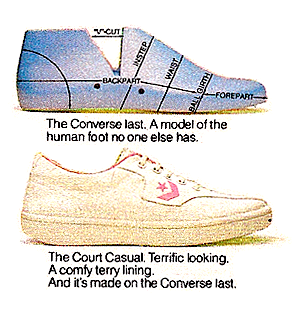 The Converse last. A model of the human foot no one else has.

The Court Casual. Terrific looking. A comfy terry lining. And it’s made on the Converse last.

Because no other tennis shoe is made on the Converse last, no other shoe fits your foot like a Converse.

And while other shoes may have soft inner soles, and terry linings the way Converse does, they just can’t deliver the same support and comfort a Converse can.

So the next time you need tennis shoes, remember how Chris Evert beat everyone at Wimbledon.

She played hard, wore Converse, and outlasted them.

converse
Reach for the stars.

Converse Tennis All Star “NOW! a converse All Star… for tennis”

Converse Chris Evert and Jimmy Connors “The only tennis star to win both the men’s and women’s U.S.Open.”

Converse Coach in Suede and Canvas

Converse Fastbreak “A LIGHTWEIGHT FOR THE HEAVY WEIGHT.”