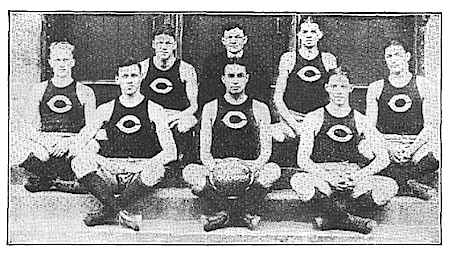 Last season’s Western Conference Champions, the Chicago University team. Both men and coach are “All Star” wearers and boosters.

THE Chicago University team, last season’s winners of the Western Conference Championship, and Purdue, runners-up in Championship, Northwestern, Indiana,- virtually all the university teams of prominence throughout the United States wear “All Star” Basketball Shoes.
Here’s what “Pat” Page, one of the best known coaches in the country, thinks “All Star.” And he’s one of any number of coach who enthusiastically endorse Converse Basketball Shoes. 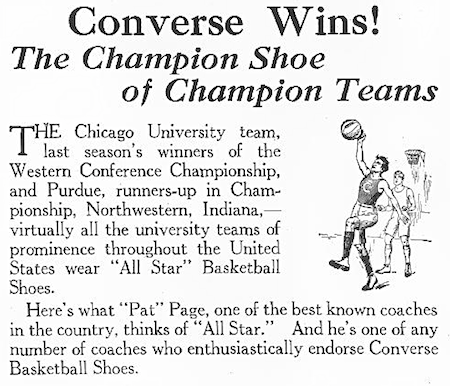 “I wish to take this opportunity to thank you personally for the effort you have made to put an ideal basket-ball shoe on the market.
During the past two years while having a winning team at the University of Chicago, we enjoyed the use of your All Star, Non Skid Shoes. I would be very pleased to endorse the same, as I have great faith in their wearing ability. Very truly yours, Director Athletics.” 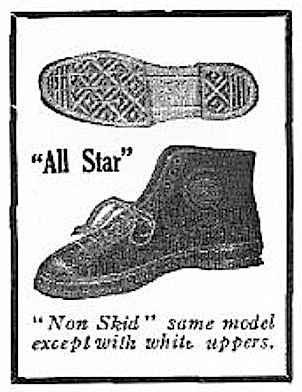 “All Star”
“Non Skid” same model
except with white uppers.

Basketball, Handball and Gym teams all over the country are enthusiastic wearers of “All Star” and “Non Skid” shoes because they combine speed and resilience with peerless service. The “Traction Sole” clings to the floor. “All Star” has brown uppers- “Non Skid” has white uppers-otherwise they are the same. Both have the famous “Traction Soles” 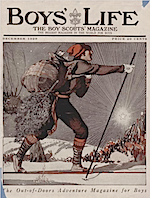 Converse All Star “LIMOUSINES FOR YOUR FEET.”

Sears The Winner “Get the feel of a Winner!”

Converse All Star / Coach / leather All Star basketball shoes “Step into the shoes of the greatest basketball players in the world.”