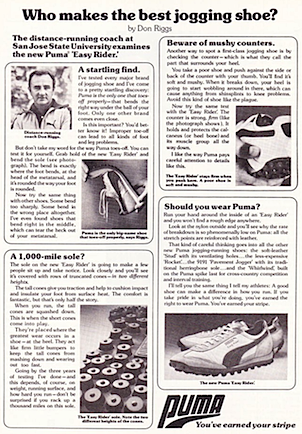 Who makes the best jogging shoe ?
by Don Riggs 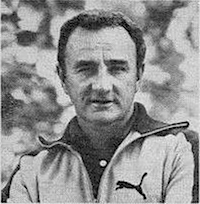 I’ve tested every major brand of jogging shoe and I’ve come to a pretty startling discovery: Puma is the only one that toes-off properly – that bends the right way under the ball of your foot. Only one other brand comes even close.

Is this important? You’d better know it! Improper toe-off can lead to all kinds of foot and leg problems.

But don’t take my word for the way Puma toes-off. You can test it for yourself. Grab hold of the new ‘Easy Rider’ and bend the sole (see photo-graph). The bend is exactly where the foot bends, at the head of the metatarsal, and it’s rounded the way your foot is rounded.

Now try the some thing with other shoes. Some bend too sharply. Some bend in the wrong place altogether. I’ve even found shoes that bend right in the middle, which can tear the heck out of your metatarsal. 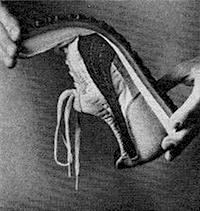 Puma is the only big-name shoe that toes-off properly, says Riggs.

The sole on the new ‘Easy Rider’ is going to make a few people sit up and take notice. Look closely and you’ll see it’s covered with rows of truncated cones – in two different heights.

The tall cones give you traction and help to cushion impact and insulate your foot from surface heat. The comfort is fantastic, but that’s only half the story.

When you run, the tall cones are squashed down. This is when the short cones come into play.

They’re placed where the greatest were occurs in a shoe – at the heel. They act like firm little bumpers to keep the tall cones from mashing down and wearing out too fast.

Going by the three years of testing I’ve done – and this depends, of course, on weight, running surface, and how hard you run – don’t be surprised if you rack up a thousand miles on this sole. 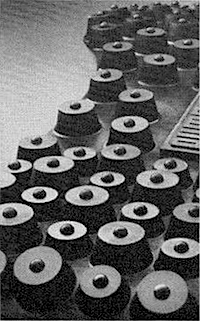 The ‘Easy Rider’ sole. Note the two different heights of the cones.

Another way to spot a first-class jogging shoe is by checking the counter – which is what they call the part that surrounds your heel.

You take a poor shoe and push against the side or back of the counter with your thumb. You’ll find it’s soft and mushy. When it breaks down, your heel is going to start wobbling around in there, which can cause anything from shinsplints to knee problems. Avoid this kind of shoe like the plague.

Now try the same test with the ‘Easy Rider’. The counter is strong. firm (like the photograph shows).

It holds and protects the calcaneus (or heel bone) and its muscle group all the way down. 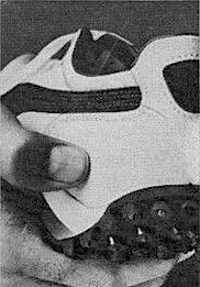 The ‘Easy Rider’ stays firm when you push here. A poor shoe is soft and mushy.

Should you wear Puma?

Run your hand around the inside of an ‘Easy Rider’ and you won’t find a rough edge anywhere.

Look at the nylon outside and you’ll see why the rate of breakdown is so phenomenally low on Puma: all the stretch points are reinforced with leather.

That kind of careful thinking goes into all the other new Puma jogging-running shoes: the soft-leather ‘Stud’ with its ventilating holes … the less-espensive ‘Rocket’… the 9191 ‘Pavement Jogger’ with its traditional herringbone sole … and the ‘Whirlwind’, built on the Puma spike last for cross-country competition and interval training.

I’ll tell you the same thing I tell my athletes: A good shoe can make a difference in how you run. If you take pride in what you’re doing, you’ve earned the right to wear Puma. You’ve earned your stripe. 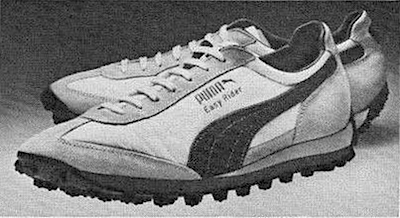 Puma King Pele soccer shoes “Puma Where the action is !”

Puma Elite Rider “PUMA. OUR STORY IS ON THE BOX.”