Puma Hard Court “Why one tennis shoe lasts longer than others” 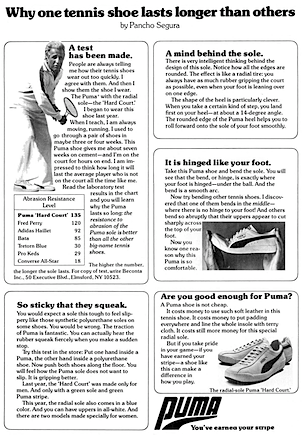 Why one tennis shoe lasts longer than others
by Pancho Segura 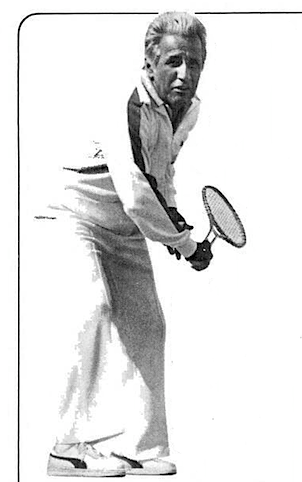 A test has been made.

People are always telling me how their tennis shoes wear out too quickly. I agree with them. And then I show them the shoe I wear.

The Puma with the radial sole – the ‘Hard Court.’

I began to wear this shoe last year.

When I teach, I am always moving, running. I used to go through a pair of shoes in maybe three or four weeks. This Puma shoe gives me about seven weeks on cement – and I’m on the court for hours on end. I am impressed to think how long it will last the average player who is not on the court all the time like me.

Read the laboratory test results in the chart and you will learn why the Puma lasts so long: the resistance to abrasion of the Puma sole is better than all the other big-name tennis shoes. 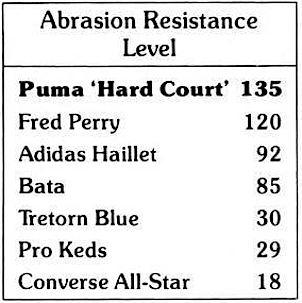 The higher the number. the longer the sole lasts. For copy of test, write Beconta Inc., 50 Executive Blvd., Elmsford. NY 10523.

So sticky that they squeak.

You would expect a sole this tough to feel slippery like those synthetic polyurethane soles on some shoes. You would be wrong. The traction of Puma is fantastic. You can actually hear the rubber squeak fiercely when you make a sudden stop.

Try this test in the store: Put one hand inside a Puma, the other hand inside a polyurethane shoe. Now push both shoes along the floor. You will feel how the Puma sole does not want to slip. It is gripping better.

Last year, the ‘Hard Court’ was made only for men. And only with a green sole and green Puma stripe.

This year, the radial sole also comes in a blue color. And you can have uppers in all-white. And there are two models made specially for women.

A mind behind the sole.

There is very intelligent thinking behind the design of this sole. Notice how all the edges are rounded. The effect is like a radial tire: you always have as much rubber gripping the court as possible, even when your foot is leaning over on one edge.

The shape of the heel is particularly clever. When you take a certain kind of step, you land first on your heel – at about a 14-degree angle. The rounded edge of the Puma heel helps you to roll forward onto the sole of your foot smoothly.

Take this Puma shoe and bend the sole. You will see that the bend, or hinge, is exactly where your foot is hinged – under the ball. And the bend is a smooth arc.

Now try bending other tennis shoes. I discovered that one of them bends in the middle – where there is no hinge to you foot! And others bend so abruptly that their uppers appear to cut sharply across the top of your foot.

Now you know one reason why this Puma is so comfortable. 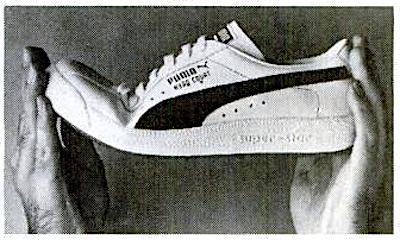 Are you good enough for Puma?

But if you take pride in your game – if you have earned your stripe – a shoe like this can make a difference in how you play. 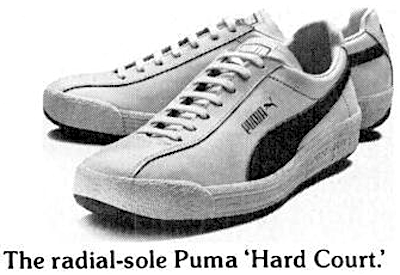