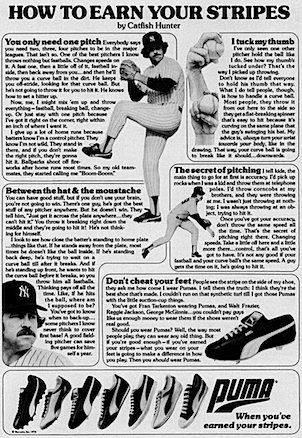 HOW TO EARN YOUR STRIPES by Catfish Hunter

You only need one pitch

Everybody says you need two, three, four pitches to be in the major leagues. That isn’t so. One of the best pitchers I know throws nothing but fastballs. Changes speeds on it. A fast one, then a little off of it, fastball in- side, then back away from you … and then he’ll throw you a curve ball in the dirt. He keeps you off-stride, looking for that curve ball. But he’s not going to throw it for you to hit it. He knows how to set a hitter up.

Now, me, I might mix ‘em up and throw everything – fastball, breaking ball, changeup. Or just stay with one pitch because I’ve got it right on the corner, right within an inch of where I want it.

I give up a lot of home runs because batters know I’m a control pitcher. They know I’m not wild. They stand in there, and if you don’t make the right pitch, they’re gonna hit it. Ballparks shoot off fire works after home runs most times. So my old team mates, they started calling me “Boom-Boom.” 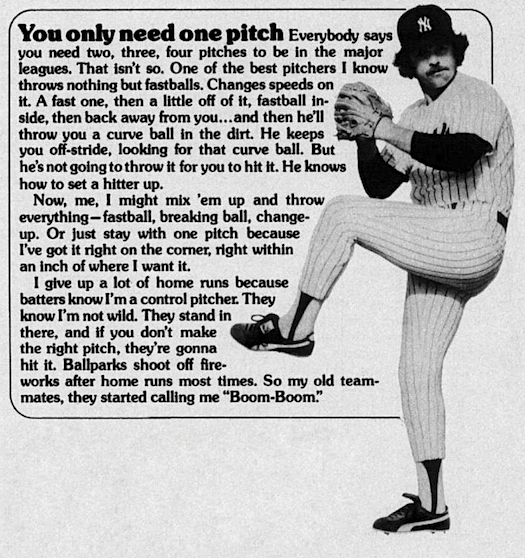 I tuck my thumb

I’ve only seen one other pitcher hold the ball like I do. See how my thumb’s tucked under? That’s the way I picked up throwing. Don’t know as I’d tell everyone to hold his thumb that way. What I do tell people, though, is how to handle a curve ball. Most people, they throw it from out here to the side so they get a flat-breaking spinner that’s easy to hit because it’s curving on the same plane that the guy’s swinging his bat. My advice is, always turn your wrist towards your bady, like in the drawing. That way, your curve ball is going to break like it should … downwards. 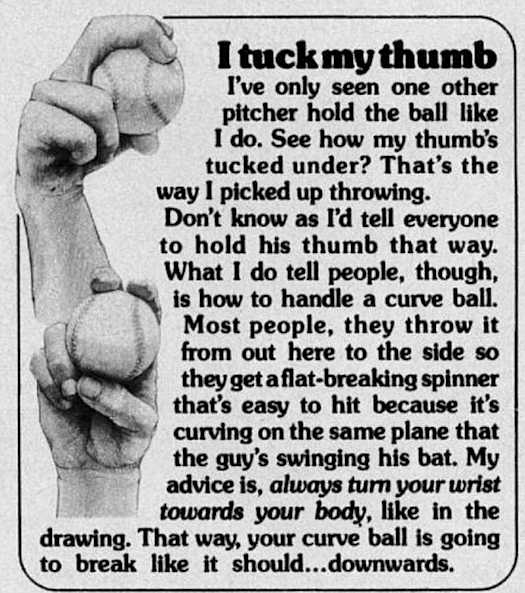 Between the hat & the mustache

You can have good stuff, but if you don’t use your brain, you’re not going to win. There’s one guy, he’s got the best stuff of any pitcher anywhere. But he doesn’t win. They tell him, “Just get it across the plate anywhere … they can’t hit it.” You throw it breaking right down the middle and they’re going to hit it! He’s not thinking for himself.

I look to see how close the batter’s standing to home plate … things like that. If he stands away from the plate, most times he doesn’t like the ball inside. If he’s standing back deep. he’s trying to wait on a curve ball till after it breaks. And if he’s standing up front, he wants to hit the curve ball before it breaks, so you throw him all fastballs. Thinking pays off all the time. Like, if he hits the ball, where am I supposed to be? You’ve got to know when to back-up … some pitchers I know never think to cover first base! A good fielding pitcher can save five games for himself a year. 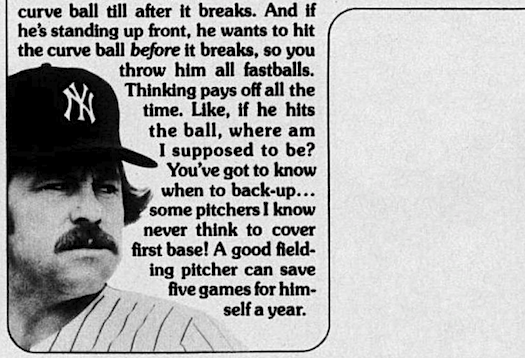 The secret of pitching

I tell kids, the main thing to go for at first is accuracy. I’d pick up rocks when I was a kid and throw them at telephone poles. I’d throw corncobs at my brothers, and they were throwing at me. I wasn’t just throwing at nothing; I was always throwing at an object, trying to hit it. Once you’ve got your accuracy, don’t throw the same speed all the time. That’s the secret of pitching right there. Changing speeds. Take a little off here and a little more there … control, that’s all you’ve got to have. It’s not any good if your fastball and your curve ball’s the same speed. A guy gets the time on it, he’s going to hit it. 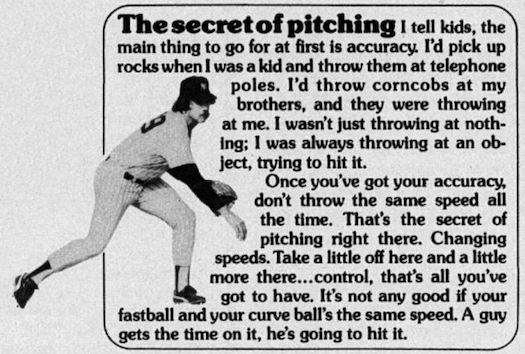 people see the stripe on the side of my shoe, they ask me how come I wear Pumas. I tell them the truth: I think they’re the best shoe that’s made. I couldn’t run on that synthetic turf till I got those Pumas with the little suction-cup things.

You’ve got Fran Tarkenton wearing Pumas, and Walt Frazier, Reggie Jackson, George McGinnis … you couldn’t pay guys like us enough money to wear them if the shoes weren’t real good.

Should you wear Pumas ? Well, the way most people play, they can wear any old thing. But if you’re good enough – if you’ve earned your stripes – what you wear on your feet is going to make a difference in how you play. Then you should wear Pumas. 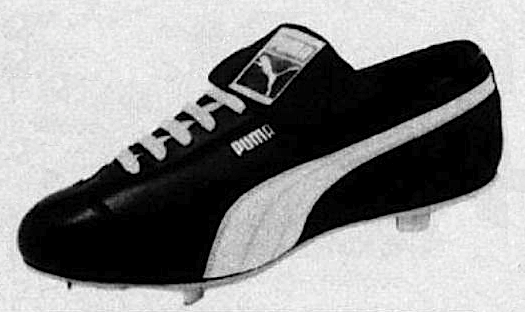 PUMA
When you’ve earned your stripes. 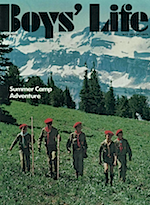 Puma Soccer shoes “We make Pumas for Pele, And you.”