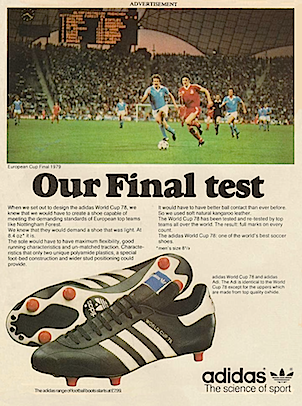 When we set out to design adidas World Cup 78, we knew that we would have to create a shoe capable of meeting the demanding standards of European top teams like Nottingham Forest.

We knew that they would demand a shoe that was light. At 8.4 oz ※ it is.

The sole would have to have maximum flexibility, good running characteristics and un-matched traction. Characteristics that only two unique polyamide plastics, a special foot-bed construction and wider stud positioning could provide.

It would have to have better ball contact than ever before. So we used soft natural kangaroo leather. The World Cup 78 has been tested and re-tested by top teams all over the world. The result: full marks on every count.

The adidas World Cup 78: one of the world’s best soccer shoes.

adidas World Cup 78 and adidas Adi. The Adi is identical to the World Cup 78 except for the uppers which are made from top quality oxhide. 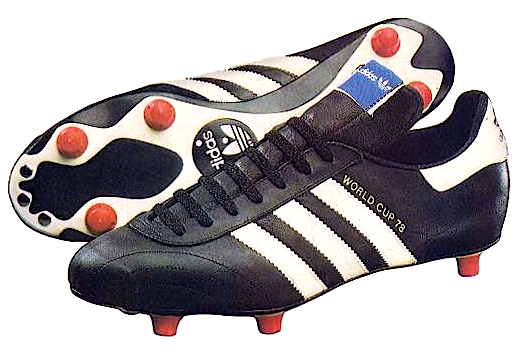 The adidas range of football boots starts at £7.99.

adidas
The science of sport

adidas Marathon’80 running shoes “We’ve got a feeling for winning.”