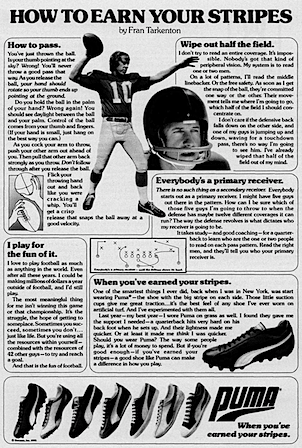 HOW TO EARN YOUR STRIPES
by Fran Tarkenton

Do you hold the ball in the palm of your hand? Wrong again! You should see daylight between the ball and your palm. Control of the ball comes from your thumb and fingers. (If your hand is small, just hang on the best way you can.)

As you cock your arm to throw, push your other arm out ahead of you. Then pull that other arm back strongly as you throw. Don’t follow through after you release the ball.

Flick your throwing hand out and back like you were cracking a whip. You’ll get a crisp release that snaps the ball away at a good velocity.

Wipe out half the field.

I don’t try to read an entire coverage. It’s impossible. Nobody’s got that kind of peripheral vision. My system is to read one or two men.

On a lot of patterns, I’ll read the middle linebacker. Or the free safety. As soon as I get the snap of the ball, they’re committed one way or the other. Their movement tells me where I’m going to go, which half of the field I should concentrate on.

I don’t care if the defensive back falls down on the other side, and one of my guys is jumping up and down, waving for a touchdown pass, there’s no way I’m going to see him. I’ve already wiped that half of the field out of my mind. 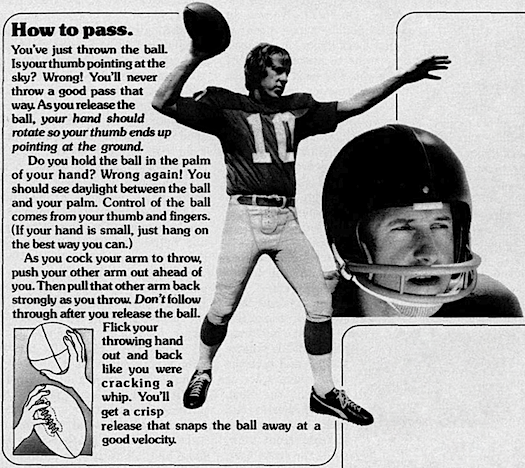 There is no such thing as a secondary receiver. Everybody starts out as a primary receiver. I might have five guys out there in the pattern. How can I be sure which of those five guys I’m going to throw to when the defense has maybe twelve different coverages it can run? The way the defense revolves is what dictates who my receiver is going to be.

It takes study – and good coaching – for a quarterback to learn who are the one or two people to read on each pass pattern. Read the right men, and they’ll tell you who your primary receiver is.

Everybody’s a primary receiver – until the defense shows its hand.

I play for the fun of it.

I love to play football as much as anything in the world. Even after all these years. I could be making millions of dollars a year outside of football, and I’d still play.

The most meaningful thing for me isn’t winning this game or that championship. It’s the struggle, the hope of getting to someplace. Sometimes you succeed, sometimes you don’t … just like life. But you’re using all the resources within yourself – combined with the resources of 42 other guys – to try and reach a goal. And that is the fun of football.

When you’ve earned your stripes.

One of the smartest things I ever did, back when I was in New York, was start wearing Puma – the shoe with the big stripe on each side. Those little suction cups give me great traction … it’s the best feel of any shoe I’ve ever worn on artificial turf. And I’ve experimented with them all. Last year – my best year – I wore Puma on grass as well. I found they gave me the support I needed – a quarterback hits very hard on his back foot when he sets up. And their lightness made me quicker. Or at least it made me think I was quicker. Should you wear Puma? The way some people play, it’s a lot of money to spend. But if you’re good enough – if you’ve earned your stripes – a good shoe like Puma can make a difference in how you play.

PUMA
When you’ve earned your stripes. 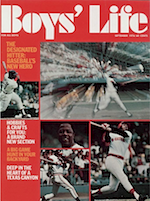 Puma Joe Namath football shoes “We make Pumas for Namath. And you.”

Puma Soccer shoes “We make Pumas for Pele, And you.”